Path to Beginnery in Functional Programming with Haskell

Introduction to the Series

I have done a little functional programming in Scala. I tend to write short scripts to help myself and users on the University of Pittsburgh's compute resources. Because of the JVM startup and length of my scripts it just made more sense to use Python. I want to embrace FP completely and decided something like Haskell would fit my needs better. Additionally, I did a PhD in Theoretical Chemistry so I am not averse to math and theory. In fact, I would like to continue working with math and theory without writing Fortran. So, I recently started working through the Learn You a Haskell book.

In this blog series, I want to document my path to "Beginnery" in Haskell. I have no formal training with Computer Science and I wouldn't call this series educational. If it helps anyone that would be a great bonus. I just want to be able to look back and track my own progress. I don't really want to accept comments on this website, please direct message me on Twitter @BarryMooreII. and I will try to fix any mistakes, accept feedback for my crappy code, or potentially accept new problems.

Here's the format I want to follow: Take a project from somewhere and try to solve the problem without reading the solution. Then, attempt to add some additional functionality to the project. Finally, read the solution and hopefully learn something.

Definition of the Problem

Let's consider two paths from a starting point to an end point. We'll label the paths A and B. Along the paths there are additional paths which connect A to B. Here's a pictoral representation:

Path A would be along the top and B along the bottom. We want to determine the shortest path from Start to End.

Breaking up the Problem

I will break the problem up into sections which look like: 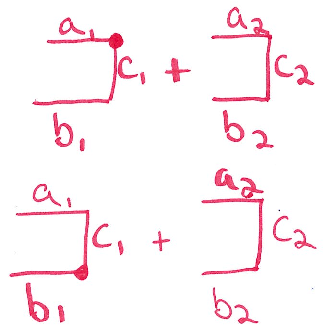 To determine the next shortest path you would evaluate:

This is the layout of a folding problem. If you are unfamiliar with folds the basic idea is that we will layout our sections into a list and define a function which will combine them one by one into a new data structure until we reach the End. The definition of our data structures:

A RoadSec is a tuple of \((a_i, b_i, c_i)\). The Path is the data structure we will use to combine on. The first element is simply the distance travelled (m for minimum distance). The second element is the actual path taken (p for path), e.g. abaa means:

If you look at the 2 possible combinations of sections above, you will notice we don't use \(c_2\)! The final element in the Path tuple is \(c_1\) for the next section combination.

Next, you have to define a function to combine the initial Path with a RoadSec to make the next Path:

Reminder: m is the overall minimum distance, p is the overall path taken, c1 is the cross section from the previous combination, (a2, b2, c2) is the next RoadSec. If we are on path "a", we want to take the minimum of continuing on path A or crossing over (i.e. crossB). Starting on path "b" is obviously similar and the only other option, hence otherwise. To figure out what path we are on, we take the first entry in p. It turns out prepending to a list is faster than appending in Haskell (i.e. p is stored backwards). I have read this observation about Haskell in a few different places and I trust that in most cases it is true. However, never forget: "premature optimization is the root of all evil" and I should measure to be sure. The function takeWhich generates the string to add to the path and c2 is used as c1 in the next combination. Now, assuming we have a list of RoadSec we can simply do a foldl:

Notice how I separate the base case from the rest of the list. Also, foldl takes a function B -> A -> B (e.g. foldRoadSecs), a B (Path), and a [A] (list of A, RoadSec) and generates a B (Path). Now, we can take the first element of the resulting Path to get the minimum distance travelled, reverse the second element to get the path you should travel, and the third element is not useful in this case.

I changed the layout of the data compared to the book because I thought it was more readable. Our program will read a CSV file with exactly 3 columns, i.e.:

Each line represents a section and there are n sections.

I decided that the program should take the CSV as STDIN. I came up with:

Starting from the right, lines contents generates a [String] which is fed to csv3ToRoadSecs, defined as:

This took me longer than I want to admit to get correct, but that is okay. Starting with the function composition: toRoadSec . map (read::String->Int) . splitOn ",", on the right: splitOn "," takes a String and generates a [String] splitting on commas. Then we map read on each String to generate an Int, finally we convert the [Int] to a RoadSec. Then we map the function composition over the [String] from lines contents. It isn't too hard when you follow the types.

Conceptually, I wanted to represent p in Path as [Char] but some of the type checking became problematic. String is exactly the same as [Char], but [Char] didn't operate as I expected. This could have been a misunderstanding on my part, but it was easier to use String everywhere. I think this is a minor point, but I did get hung up on the type checking.

The feature I decided to add was generating a pictoral representation of the path travelled. Basically, it is another folding problem which is great because I know how to solve those. Our [A] in this case is the p from the final Path and the B will be a PictoralRepr, defined as:

Where the first entry will contain the current path similarly to the first element of Path, but we don't need to keep the overall path! Only the most recent one. The next 3 will build a top, middle, and bottom row as a String. For example, if we had p = "aa" we would want to generate the representation:

Our base case is simply the starting path ("a" or "b") and three empty strings to hold the representations. Our folding function:

Where p is the current path, t is the top representation, m is the middle representation, b is the bottom representation, and n is where we are headed next. There are four possibilities, "aa", "ab", "bb", "ba". Depending on the combination we prepend the new strings to the representations (remember prepend faster than append) and the final representation should be reversed. Finally, the actual foldl call:

The input is a String and we take off the first Char which is why [x] is necessary (reminder: String made type checking easier). The composition tail . splitOn "" converts a String (xs) into [String]. It's easier to show you why the tail is necessary:

splitOn adds an empty string in the head position. Finally, there is one issue. The final path is never added to the representation and we need to deal with it specially. Luckily we already have our folding function, so it is easy as:

Where pathStr extracts the p from a Path. prev extracts the "previous" position which would have been used to make the next combination. We can simply using our folding function on repr itself to generate the last part of the representations.

I am using stack, which I know very little about thus far. I compiled the code with:

Run on the example in the book which generates p = "babb":

Sweet! I generated a larger random CSV file with Python, numpy, and pandas (obviously I should be using Haskell!):

This was a fun little project. I am feeling a lot more comfortable about folding. The entire code with all of the helper functions can be found on gist. I can't stop you from making comments, but understand I am a novice. I will learn better techniques as I continue.

I don't know what the next Haskell project will be, but I do want to start another blog series about Warewulf covering everything from what it is to installation and building RPMs to configuring nodes. The ultimate goal of that series will be to contribute to their documentation.